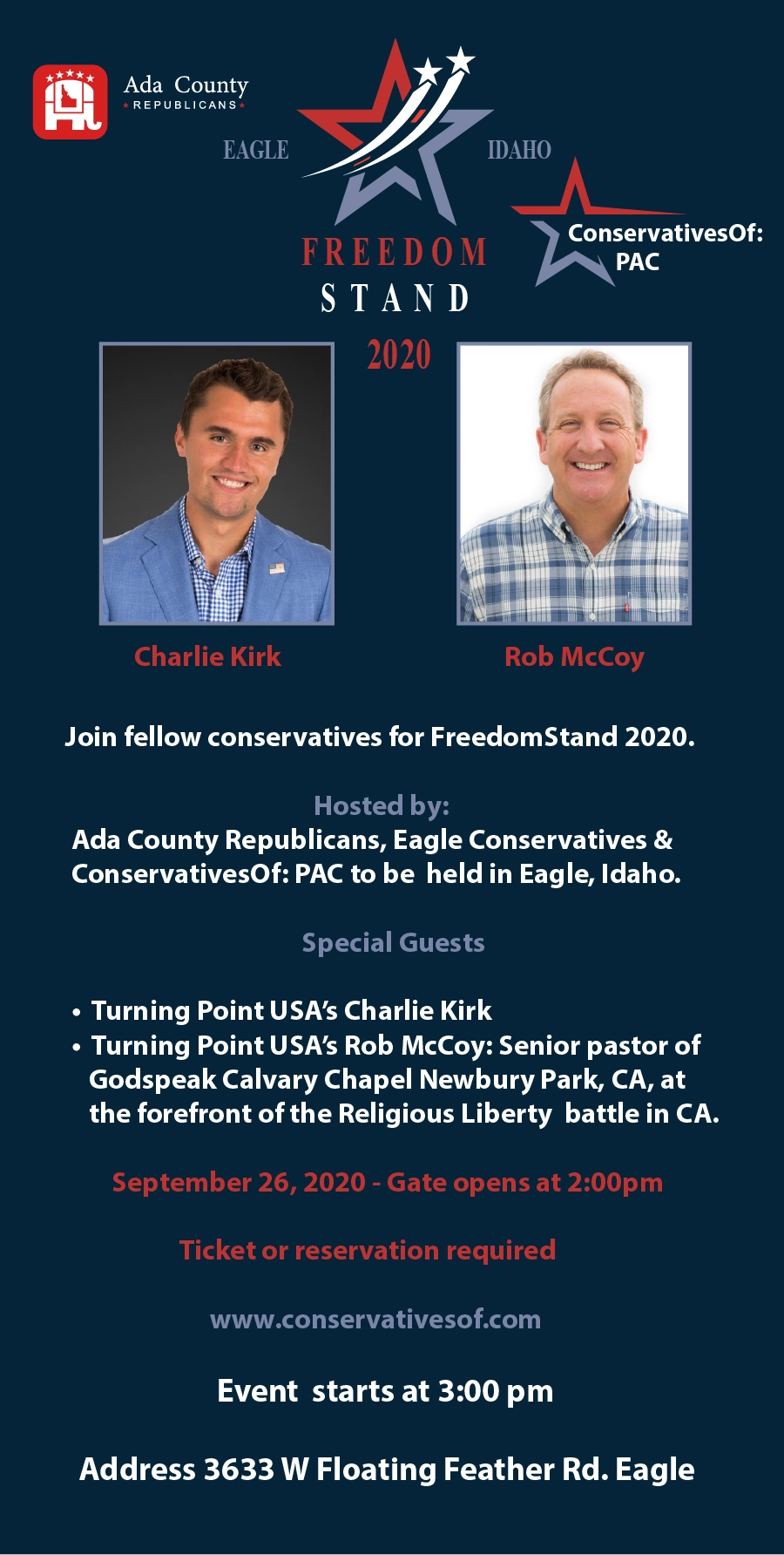 FreedomStand has a valuable message for all conservatives and all people who value freedom.

Charlie Kirk, founder and president of Turning Point USA, spoke on the first night of the Republican National Convention on Aug. 24, 2020. His message is valuable for all conservatives and Republicans.

When The Moral Law Is No Longer The Authority

Charlie Kirk and Rob McCoy give their perspective of why the pulpits should be the counselor to the government. In this teaching, you will discover why the church is the moral preservative to the world and why it is important to take a stand in the community. All people, whether conservative or not, need to hear their message to America.

Car wash beyond comparison. We support Veterans with generous discounts.

Technical Support and Managed IT for the Treasure Valley

BringOurTroopsHome.US: Dedicated to ending American involvement in wars in the Middle East and bringing our troops home.

Some useful and exciting things to know in the political landscape.

We can use your help. The task at hand is big and the need is great. If you don't, who will?

Republicans and conservatives who care can volunteer HERE.

Our primary mission is to promote and maintain the Conservative Judeo-Christian principles upon which our nation is established. Utilizing informational resources in order to educate and inform our Nation's citizenry and conservatives is essential to the preservation of those foundations as a fundamental component in the fight against the

Our primary mission is to promote and maintain the Conservative Judeo-Christian principles upon which our nation is established. Utilizing informational resources in order to educate and inform our Nation's citizenry and conservatives is essential to the preservation of those foundations as a fundamental component in the fight against the secular philosophies of liberalism, socialism, progressivism, and ideological collectivism in general, which have wreaked havoc upon our National Heritage. We are committed to formulating a rapid response addressing every opposition to our God-given inalienable rights and conservative Constitutional Republican values, the strategic deployment of assets and resources, and standing firm for what we know to be right and good.

The ConservativesOf PAC, domain and associated Social Media representations (will) serve as a nationwide Mass Mobilization hub for the purpose of gathering and providing information on Candidates and Ballot Measures / Initiatives of all three levels of the political arena: Local, State and Federal, with a focus on often overlooked Local Elections especially which are “nonpartisan” in nature, more numerous, and therefore often more difficult to acquire the pertinent information regarding their ideological and political affiliations and origins.

The nonpartisan nature of many local elections present the problem of a potential inability to identify and determine, which candidates and ballot measures are representative of the conservative position due to undisclosed or not readily available party affiliation, origin and purpose. Even when local elections are not nonpartisan in nature, oftentimes information on local candidates and Measures are not as readily available in contrast to information concerning State and Federal elections. ConservativesOf will act as a “one stop” web based hub in which over time, every jurisdiction will be covered / represented with the properly vetted pertinent information on Candidate names and Ballot Measures / Initiatives representative of the Conservative position in order to mitigate or eliminate the problem of ignorance and misinformation which could potentially cause voters to cast their ballots for Candidates and Initiatives not actually and adequately representative of their values and intentions.

The vision for Freedom Stand conferences and events are to generate awareness concerning the origins and nature of our Constitutional Republican system of government, as well as the constant attempts by political leaders and organizations to infringe upon them for various ulterior motives and intents, or due to a lack of understanding with regard to their purposes and virtues as they establish and maintain our inalienable rights and national liberties. FreedomStand features prominent and Conservative speakers and thinkers who are able to effectively articulate the Conservative message and galvanize support and a call to action and political and civic engagement

Help Our Cause, Please Donate

Sign up to hear from us about events, commentary, political and election issues, and conservative concerns.

Not authorized by any candidate or candidate committee.

Copyright © 2020 Conservatives Of - All Rights Reserved.